The only reason for not filing a bug report was because you and several others stated that you have it working so it seemed a configuration issue but after 20 or 30 attempts it finally turns out that it is based on design that is not structured to follow conventional mail standards for relay and login as is noted with others finding issues with gmail and aol. I still find it hard to believe that anyone has it working with office365 in ver 7 because even with a connector based ip it fails because email accounts need to be authenticated in erpnext???

Just so you know for future, raising an issue in Github can be done for any kind of a change you’d like to see in the product. It doesn’t mean anything will be done about it

but that’s the place to put them and discuss them. A Github Issue could be a feature request, or a bug report, or a suggestion for a change to a current feature.

I’m sure everyone on this forum knows the pain of trying to discover how a feature works or can work for you that has less than optimal documentation or no documentation. People try to help each other out as best they can, when they have time. I spent 2 months trying to learn how to properly install the software and setup a development environment. I consider the time spent understanding the software the “cost” of the product, and it’s still low. The Frappe team work very hard to make ERPNext great and they owe us nothing but they keep giving anyway. I always keep that in mind when something doesn’t work the way I expect or would like. I find that the more respect I give the more help I get, and I need a lot of help.

I’m sorry your email issue means a delay in using ERPNext to it’s fullest, I hope a resolution is found soon and I’m sure it will benefit us all.

I am all about open source, community development and contribute to many projects where i have a specific skill to offer and have for many years i am just struggling with the concept that erp which is so dependent on email and is not working regardless of the workarounds and suggestions from others i apply, email is at the core of erp always has been, its kind of like having oven without fuel to run it… I like what ERPNext is doing from the vid and functionality and why i left oddo but email is pretty big…Python is not my forte but i will dig in just not excited about the lack of focus on this fundamental issue that others have brought up for a long time??? no judgement here just trying to understand what’s really important so i can assess the fit…

I have a new fresh install and do not want to contaminate the email accounts settings. I know I can make it work via mailjet but would really like to have it native office365 can anyone confirm that email accounts work both ways in version:
ERPNext: v7.1.3
Frappe Framework: v7.1.3
If so please post screen shots so I can emulate.

Hi,
Is there any news regarding the O365 integration?

Ms has a very good reference on the API and how it should be used:
Office 365 API reference

I am also willing to help on the topic.
Not a developer anymore, but I am available to assist in any other way possible.

The issue is that for some reason on the smtp outbound setting the option to specify login was removed and changed to a one size fits all approach with domains and email inbox. this new implementation feels awkward to me. it works just not as well as it did before the change.

What additional functionality were you looking for?

For me the fact that if you use outlook, Communications in ERPNext does not get updated automatically so I have go in and clear out mailboxes in ERPNext manually if I have already read and responded in outlook. seems like it should mark as read in ERPNext using the imap flags like other apps do.

The functionality that I’m looking for is as follows:

Every Main functionality in erpnext should have the option to specify the account being used for sending mail. (Invoices, Quotes)
Or at least a default sending account.
Maybe the option should sometimes be there to select a different sending account depending on the specific situation.

There is no need for open relay system, where you don’t need password auth.
I personally also don’t need a mail sync solution with ERPNext.
What I do need is that when a mail is sent via ERPNext, it is also visible in the sent items of my O365 maibox.
This is the case if you use the O365 API.

Well said and exactly what we have and I suspect many others need.

I have used many integrated products with exchange and office365 but by far the mail implementation in ERPNext seems to be the most awkward.

Can you tell us about how you implemented the office365 API with ERPNext?

I haven’t implemented it yet. Never needed to implement it because this is most of the time a standard supported functionality.

I just know that I mentioned this to other companies who develop software now, and they both managed to implement it within a couple of weeks.

I would love to invest in the feature. And though I know my way around coding, I’m not a developer anymore.
Still it is very strange for me that this feature is not yet implemented by ERPNext core.
That API is supposed to be very easy to implement.
And if ERPNext wants to broaden their userbase and customers, than this seems to me an easy win.

I’m having some talks about this with another ERPNext customer.
If you like we could discuss some mutual investment for developing the solution for us?

Or ask ERPNext core what the cost would be for them to implement it.

Added to this,
There is already a request in git:

They talk about 3 items:

Why is option 4 - implementing the authenticated account system with the provided API- not mentioned as an option?

This was at the time an effort to find a compatible work around for the limitation of ERPNext mail and security model and what we could control from our side as office365 admins along with limitations of google cloud compute. More issues were created later on with the addition of the email inbox and as a result we moved to azure and found more suitable implementation yet not as good as it could be.

I agree it would be preferable to use the office365 api at the time we were only trying to at least get basic functionality that is almost universally available on other platforms.

So that all being said.
What shall we do now?

Anybody know who we can ask what the status is of the O365 implementation of ERPNext?
I the Core team doing anything on this?
Is there something planned in the near future?
If so can we help?

Maybe @rmehta can shed some light on this topic?

I have been looking at the compatibilities between the two apis today.

Thanks @jkeersmaekers for pointing out the office365 api hadn’t considered that approach as i was only trying Band-Aid the problem but I like your solution better,

I have been out of active development for sometime but after looking at both it all seems doable.

look forward to others thoughts?

what the status is of the O365 implementation of ERPNext

Please refer us - that is the forum community - to how/ where this/your specific goal is stated or outlined as a feature request, for example not here that I am aware?

Otherwise assuming your issue is among the 1000 or so issues, it may be sometime before your request is entertained.

Another option, to elevate this constructively is to post a bounty.

@clarkej you have responded to many of the post in regards to the email are you somehow involved in the development of email inbox?

My latest post Office 365 mail - #54 by imllc stated that I am looking at the code and trying to understand the synergies of the office365 api no where did I say or imply it was on the road map however this is a good place to start as @jkeersmaekers suggested. Integration with office365 would only help the implementation of ERPNext in my opinion.

No I have no particular call to integrate ERPNext with Office 365.

I just recall the Inbox launch in V8 nixed features you depended on before then, but you received little response or explanation why the changes. I struggled then too with v8 mail setup.

With others like @Julian_Robbins I would appreciate some mail content markup bugs fixed, and email reply and forwarding scenario functions added.

"
Yeah its always a challenge when something is rolled out with little documentation as to why the change occurred and in the end it erodes support and adoption of a product
"
Have you made your case here? This says the Email Inbox is first priority

Have you encountered this too? 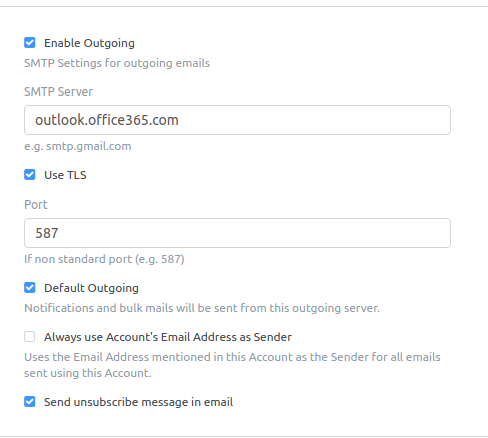