I have been trying to install stable version of ErpNext from last 15 days. I have raised two issues myself and posted two questions.

Following are the things I have tried:

While it’s good Erp, I have found it very difficult to install and run a stable version to demo it to clients. Even the master branch is not stable.

Kindly help me out.

Use the manual process on frappe/bench also make sure you have installed all prerequisites.

switched to master using bench but it’s unstable as well.

After bench switch-to-master it becomes important that you do bench update --patch as well. Did you miss this step ?

Use the manual process on frappe/bench

… equals “The Hitchhiker’s Guide to Installing Frappé on Linux OS” ?

developer branch is unstable.switched to master using bench but it’s unstable as well.

it’s not getting any more stable then master. That said let me add that I am under the impression that most people seem to be quite happy with stability in general.

another howto I have just tested successfully on ubuntu 16.04. (in a LXC container) is this one

Yes, the Hitchhiker’s Guide is the manual approach only.

I did bench update --patch as well after switch-to-master. It gives following error 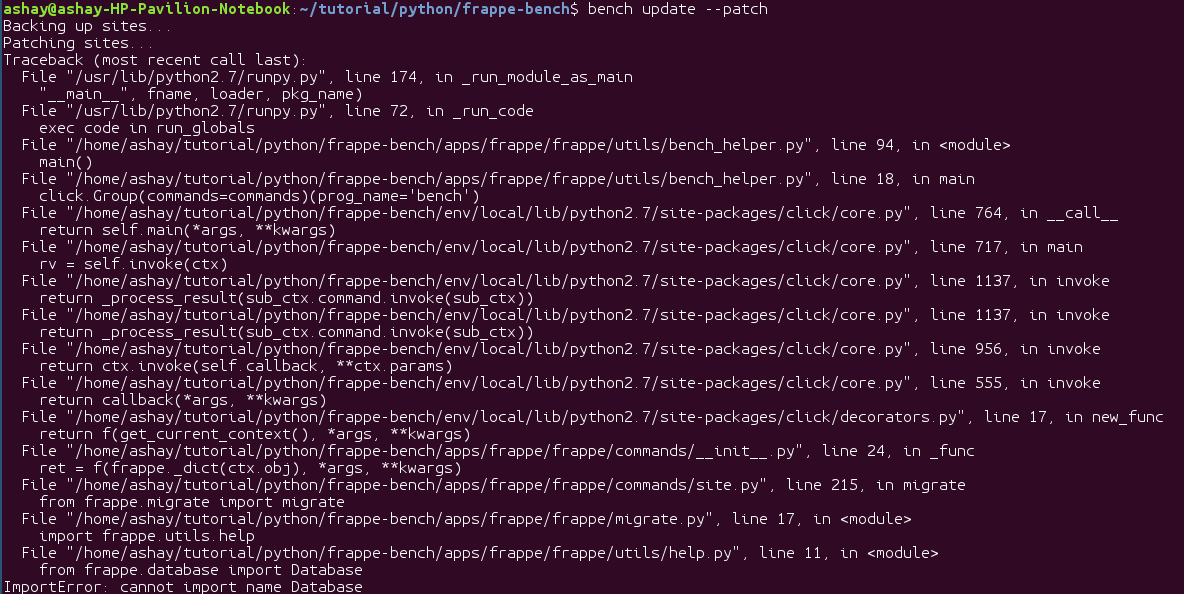 Hi All, After doing a clean manual install for Ubuntu 16.xx & Debian v8 & 9 (Specifically Debian Stretch) to understand what some of the issues/errors that we all get, following is what I ended up with that solves some of issues that come up. If anyone comes across any issues and resolves them please add them to the steps here. This is not final and I expect it can be refined further. NOTE: This of course could vary for everyone. But a few things to take into consideration Clean install on…

This one should help

If you are shifting between branches and facing this error (I face this error when I switch to develop and then back to staging-fixes), run the following command # if you are in frappe-bench folder frappe-bench > cd apps/frappe frappe-bench/apps/frappe > find . -name "*.pyc" -exec rm -f {} \; Basically, all the .pyc needs to be rebuild because of changes in lots of core files.

could not agree more