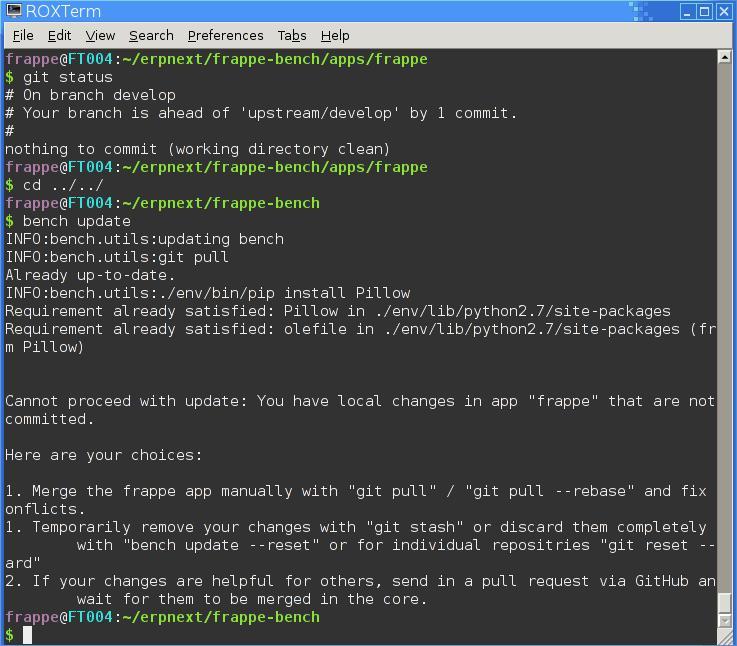 Hi. How come your develop branch for frappe is 1 commit ahead of upstream/develop?

Hi @tundebabzy, found this file difference so did the commit. 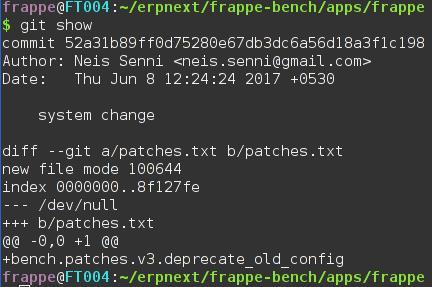 OK.
Please discard your commit from the tree and then bench update again. It’s your commit that is breaking the update. Meanwhile, always commit all changes to a local branch

@tundebabzy, how do you know that the commits are done at remote branch? I don’t think I have access to remote branch.

You can commit but cannot push.

@tundebabzy, at start the error was coming so did git reset --hard and found this file so did the commit. The commit is reverted but no change in the error. If you want me to run specific commands then please tell me. 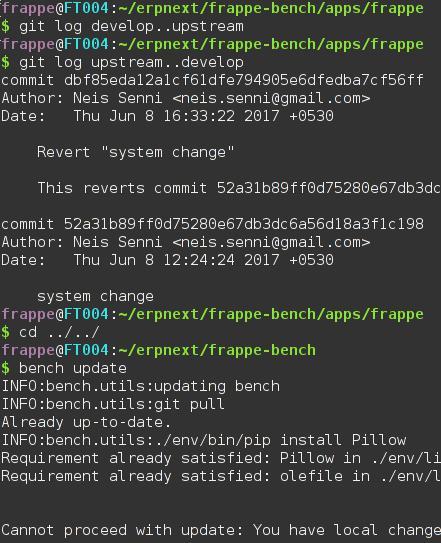 Next, copy out the hash of the commit before yours. From an earlier screenshot, it’s the one by Ayush Shukla (e2de37b). Then run:
git reset <copied out hash>

Try to update again and let’s see if that works. Sorry for the hassle though.

@tundebabzy, I just did reset (git reset --hard upstream) so now it is at Ayush Shukla’s commit but still can’t update.

I am using Antix Linux (Debian 7), are there any check specific to OS that restricts the update.

I think you can just bench update --reset it

try this in the root folder ? (upstream should be GitHub - frappe/frappe: Low code web framework for real world applications, in Python and Javascript by default)

Check if you have any files untracked in frappe, if any delete it

Are you sure that frappe is the app that causing the issue in the error thats given now ? (maybe modified erpnext or any other app could cause this too)

Please post bench update error output again if all else fails.
Thank you

@fahimalizain , I have two apps frappe and erpnext. “git status” command have run at both the apps. Please find the output here. 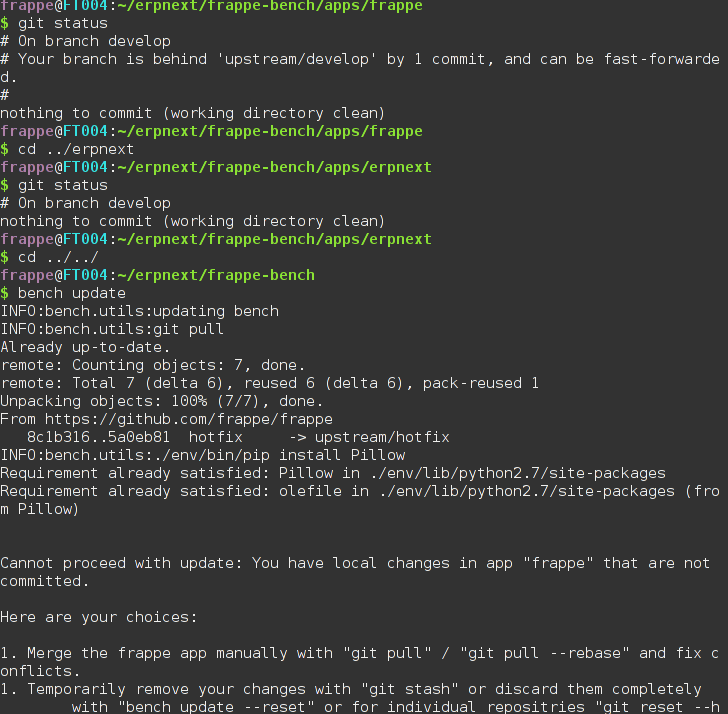 EDIT: I am not so sure if its safe to pull from the app dir itself.

Are you running Antix Linux ?
saw your post here regarding that: ERPNext setup on Antix Linux - #6 by NeisSenni

I guess git outputs are different in that ?

@fahimalizain, I have update the file app.py but its still showing the same message while doing bench update. The cause of the message seems quite correct. May be have to do something else after updating file app.py to take it into action.

Yes, I am using Antix Linux and have also mentioned it above.

I am using Antix Linux (Debian 7), are there any check specific to OS that restricts the update.

Try changing the app.py line 145 to the following and check again ?

Also confirm that the edits you make in bench .py are actually coming in action by using some test print statements.

@fahimalizain, copy and pasted the line you have suggested in app.py file. Now it is working fine. Thanks again! 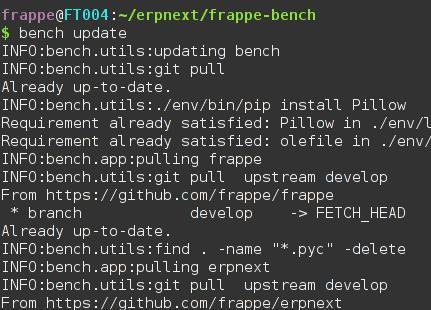