As POS was mentioned a few times in the ERPNext vs Odoo, and it is something we have interested in, I was wondering what are the chances / possibilities to have a POS with local db, like this basic model use in store: Store - Typical Configuration - Local DB 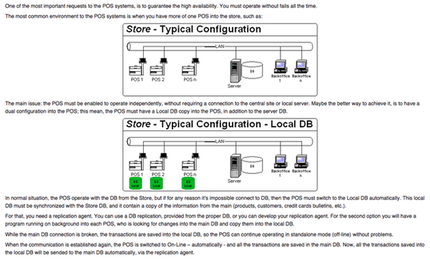 Can you sponsor it?

What would be a rough estimate for this?
Best,
François

@Francois_Ifitwala we are running short of bandwidth. It really depends on if we can hire someone for this.

I am assuming this will be a 2-3 (50 hours) week project, but we don’t want to bill everything to you. How much can you sponsor to make it interesting to us.

The requests for a more advanced POS solution has been brought up numerous times by users who have money to commit towards its development. Unfortunately these requests have been lost over time due to the volume of traffic on both this forum and Git.
I personally think a robust POS module would help ERPNext enter the small independently owned retail/restaurant market.
What do people think about creating a new category on this forum (or somewhere) to consolidate ideas/sponsors for an “Advanced POS” module?
I would also like to open the conversation about a finished “Advanced POS” Module being a paid optional extra for ERPNext end users. The end user would pay a set amount per year for each POS/Till/Cash Register.
I suggest this for several reasons. The core Frappe team have done wonders over the last two years in producing both a ton of code and support for clients and developers. As such I suspect they don’t get much time to sleep. The team have mentioned that they would like more community members to contribute towards development. The money generated from its sale could initially go towards repaying financial investors in the project. Or maybe directly to third party developers involved in creating the App? Once the 'Advanced POS" development has been paid for then maybe extra income could go towards a full time frappe core team member to look after the forums, documentation and video lessons? This would free up core team members to focus on other roles. Alternatively this money could go towards creating new advanced features developed by third party dev’s. These could be integrated directly into the core ERPNext or as a paid optional extra. Maybe Frappe Cloud could use any “advanced module” at no cost to help generate extra revenue for the core team, While external companies could offer a paid “Advanced POS” module to clients to generate money?
Lots of possibilities. Look forward to reading your thoughts on this matter.
Cheers
Rick

What is more important now is to have a system that is fault tolerant to offline moments.
The POS should be able to function even when internet connection is lost for a short time. I saw another discussion on the forum on this and apparently it is a huge task.

Actually it’s not really a huge task, I don’t know much about Python but am using right now a php scripted pos linked to a local db and replicated all entries into the main db in the cloud which is replicated to all dbs in all the warehouses (8 warehouses now) am using master to master cycle replication.

@Francois_Ifitwala Thanks for the link. Offline functionality does appear to be the most popular request. My proposal does not exclude this feature. It just tries to create an environment where these requests can be built and the required developers get paid. The payment part of my suggestion is completely open to debate and change.
@ramielian This sounds like an interesting way to approach the issue. I like the fact that it has already been tested and works with multiple warehouses. Does Cordova allow for compiling PHP to iOS/Android?

@system19 actually on Cordova its a bit tricky as no it dose not allow php compiling (as must as i know) so need to have pure js html and css alternative, but actually now if the pos module to be made there will be many people will get going on developing a mobile based version of it (and many will be paid).

now the main thing in the pos is the offline functionality which alternatively to master - master replication of mysql many current pos system are using something in SQL to do the same, and for the offline part of the system its a oper need only activities as i mentioned before, so like us we will not be using actual stock for our branches so negativity of the stock is ok for us and many others, the only thing that to be showed is the product and the price and the promotions (promotions is still missing in erpnext?)

@System19 @ramielian @Francois_Ifitwala I think the foundation is an excellent place to start driving such requests.

The Case for ERPNext Foundation

Why become a part of the ERPNext Foundation