Talk is Cheap, Show me the Code

My experience at the ERPNext Conference 2017 brings me to write this story of perspectives, goals, expectations and most of all, the essence of being a part of an Open Source Community.

The conference spanned three days with developer talks, user experiences, community discussion and a lot more revolving around ERPNext. This conference was different in a lot of ways than any other conference, the reason, best described in one word is ‘Evolve’. This wasn’t a lets-feel-good-about-ourselves conference, but rather a what-more-should-we-do conference. And this happened because of one heated argument that sparked a change, the change that led to disruption, the disruption that brought an orientation. Now as I see it, we can stand together as a better community, but it all depends on a decision that everyone has to make, it is to walk together.

First a little background, ERPNext is an open source ERP software developed on the Frappé framework. Rushabh Mehta is the founder and CEO of ERPNext, a very active developer and someone, in my opinion, is an uncomplicated and a forthright person (He never sugarcoats it!). So talking about open source projects, I have been always on the user and developer side of the project, and this conference I got to step in shoes of Rushabh and instead of walking, I got to put my thinking caps on.

So it was the second day of the conference and the focus gradually started shifting towards the issue of less contribution from the community in spite of having enormous amount of development outside the ERPNext team, all this was overwhelming, I was lost in a limbo, trying hard to focus on the conference, yet miserable failing at it because my mind is constantly jumping around questions in my head. Finally, a coffee break gave me some time to think. Not speaking much of it, let’s get to the crux of this argument which put me to question the entire concept of Open Source itself.

What is Open Source, and why it exists?

Why in the world would anyone take the time to write complicated software and then give it to the world for free? This question piqued my curiosity, I began to wonder about the benefits, if any, lie behind the ever-growing “open source” movement in technology. An answer to this is something everyone must understand.

Open Source is not just free code, it’s your code! A developer would open source his or her project because of his faith in the community, a faith that empowers him to keep developing because he knows he won’t have to do it alone, he will do it with people, people he will be better together with. This is what we call a community. As much as it’s the author’s code, it belongs to the very people using it too. And this is the beauty of Open Source, the community drives the future of the product. The community can decide what features to build, a developer working on a fork of the project can send a simple pull request, the moment it gets merged, the developer never has to worry about compatibility with future versions, simply because the community will maintain it along with him.
And no doubt, it’s disheartening to see no contributions from the community and sometimes frustrating too, but that’s the reality of open source projects. There is very little of literature which shows that an open source project died because of lack of contributions, and even if this trend goes on, Frappé will continue to develop as dedicatedly and passionately as they always did, maybe even more. ERP for Everyone will still be a motto Frappé will be true to, they will still be 100% Open Source.

But look at the other end of the spectrum, there are a plethora of examples which show how successful a project can be with the community actively, rather proactively contributing. Look at FreeCAD, it is what it is because of it’s wonderful contributors, and it will continue to be better. Understanding open source is very important, it’s because it affects us all. Put in Richard Stallman’s words “Free software is a matter of liberty, not price. To understand the concept, you should think of free as in free speech, not as in free beer”. Free Software is freedom, not a gift or a donation.

“Open source isn’t about saving money, it’s about doing more stuff, and getting incremental innovation with the finite budget you have.” — Jim Whitehurst, Chief Executive Officer at Red Hat.

These words simply define the essence of open source projects. A contribution is not just some lines of code, it’s a motivational factor too. A proactive community inspires and motivates the developers of the product to keep working, going that one extra step to make the product better and it’s this one step that marks the difference between a good product and a great product. Open Source runs on the fuel of synergy, the best things happen when we are together because we are Better Together.

The third day, this happened, 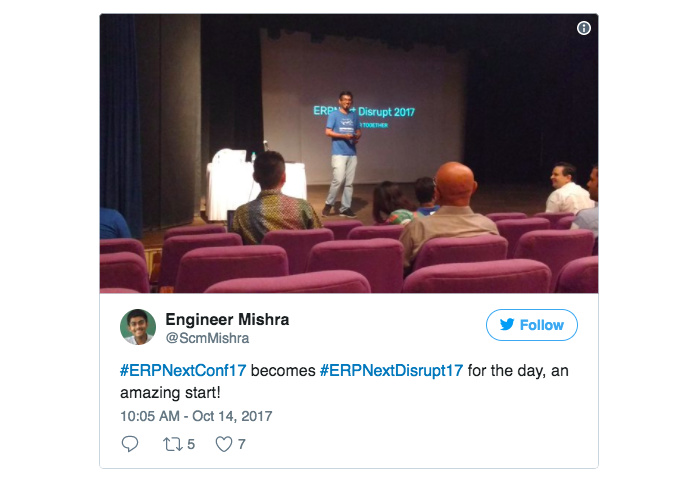 32 PM696×481 82.2 KB
And I knew something is going to happen, excited as I was, the day began to look cheering too. Maybe the heat of the disruption started to bring some orientation to the conference, and it kinda did. We noticed a certain change in the atmosphere, people were talking about giving back, helping with marketing, pitching ideas, it felt good to see it. I just hope it wasn’t fear or pity, I hope it was a shift for the good of the community.

Community stories were a substantial part of day three and they were amazing. It is so great to see how ERPNext is changing the way people do business, making things simpler and faster. Stories like these make me realize the potential of ERPNext, makes me respect the kind of freedom it gives people.

ERPNext Desktop is the next big thing, an electron app that can run locally on a single machine, independent of the platform. Point of sale, along with a basic accounts module ported from EPRNext, this is in itself an amazing application, to begin with. 100% Open Source, this can make the aspiration of ‘ERP for Everyone’ a reality faster than ever. It’s a huge project, involves porting the entire Python parts to JavaScript which is a huge task, The team is determined to ship it as early as Q1’2018 which is amazing.
The entire ‘ERPNext Suite’ (That’s what I call it) a freely available desktop application for a single user, or a cloud instance. A user can select what best suits his use case. This just gives more freedom to the user and takes us closer to making a high-quality ERP software available to everyone.
P.S. I am super excited.

I hope to see ERPNext Foundation doing it, rather than ERPNext.

Link to original article: Talk is Cheap, Show me the Code.. My experience at the ERPNext Conference… | by Shivam Mishra | Medium

ERPNext Desktop is the next big thing, an electron app that can run locally on a single machine, independent of the platform. Point of sale, along with a basic accounts module ported from EPRNext, this is in itself an amazing application, to begin with. 100% Open Source, this can make the aspiration of ‘ERP for Everyone’ a reality faster than ever.

This is very interesting.

I’m very interested to contribute to the ERPNext Desktop application. I need this for a customer.

Is it available for developers yet? Can I request an invitation to the repository?

Thanks and good job!

I am also very interested on the same, how I can know the progress and how I can contribute.

There is a demand to have ERPNext working on desktop and mobile as off-line solution.

frappe+erpnext are reshaping the world…