i have updated to the latest version one and again the drop down fields in expenses, purchase orders and everywhere else, overlap with other static fields.

I have tested these on Chrome / Firefox / Safari , still same.

Hi,
I also updated to the last versions but I still have this errors in some cases. Maybe we should run some special commands?

thanks for answer I tried didn’t help(

Still getting the error. See the overlap between customer group and territory. 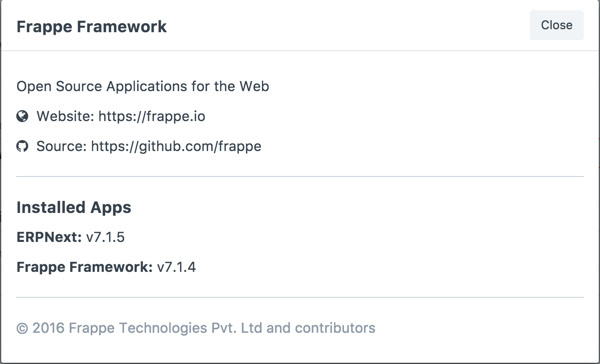 I am on the latest version as well and have tried with multiple browsers, reload, clear cache and all the rest, the fields are all messed up, overlaping on drop down and date pickers do not work.

This has to be looked at as a serious bug as it is affecting users from raising POs, Expenses, and anything that has fields within ERPNext.

See below same issues as the others.

On below version overlap issue resolved in chrome but date picker is still not visible.

I dont know why the issue still persists, since it is fixed already and not reproducible on my machine.
I’m looking into it.

since it is fixed already and not reproducible on my machine

I agree with this - on demo.erpnext.com, i am also unable to reproduce @ermalc’s issue - it works fine for me

datepicker also works for me on demo.erpnext.com

It might be easier if users use demo.erpnext.com as a base for testing and posting screenshots of issues.

not sure what you mean by demo.erpnext.com, but i am not using the online demo version.

i have ERPNext production environment setup on our servers, i am not using the online demo account.

@ermalc what @netchampfaris is trying to say is, it should be fixed. Try going to demo.erpnext.com and seeing if the same behavior happens there. if it does, then the root cause needs to be identified. If it doesn’t, then there is an issue with your local install. See this screenshot - no issues.

I understand fine what he is saying about the demo, i dont think you realise that i am running 3 different versions, separate installs of production and i have just downloaded a brand new VM and still same?

So, i have 3 production environments setup running the latest 7.1.5 and the 7.1.3, which had no issues when were at version 7.1, and now all of a sudden this is a problem with my current setup? How? Is it just a coincidence that this UI Layout bug / issue just happens to coincide at the same time as my setup and update?

Maybe It has been fixed for your demo environment, try downloading a VM and update it to the latest version of ERPNEXT and you will see what i am talking about, do not look at the online demo just because that works - live production environment does not work, once again, i have 3 instances setup and i have just dowloaded a VM on virtual box, run latest update, and still all messed up, so, my question is, is this a miss configuration on my end?

see image below, thanks

we are experiencing the same issue…

@ermalc yes - i can confirm the same. I have a locally updated vm on the master branch with css overlap issues. However, the same tools/screens work perfectly on the demo.

It looks like the pushed fixes work on the demo, but not on other installs.

@felix
Thanks for the update, yes that is what I was saying , it’s quite frustrating as some of these instances of mine are live and users using these , so quite a headache to kind of keep up with all of these bugs and issues.
Hope these get fixed soon
Thanks

This issue seems to be affecting other systems also. We use Prestashop and that is suffering.

Any idea when these patches will be pushed to erpnext.com cloud hosted systems?

Sent the PR. Will be released soon.

I have an old ERPnext Version, i manually added the fixes. but the css files won’t reload on bench restart.

instead of deleting it.
it fixes date picker and the filter dropdown.

tho it needs more testing.

I STILL NEED TO KNOW HOW TO REFRESH THE CSS FILES.