I am wondering how many people are out there that are looking for Zapier support?

I am considering sponsoring the development of it since several customers that are using for it.

I have seen this. could be a good place to start. 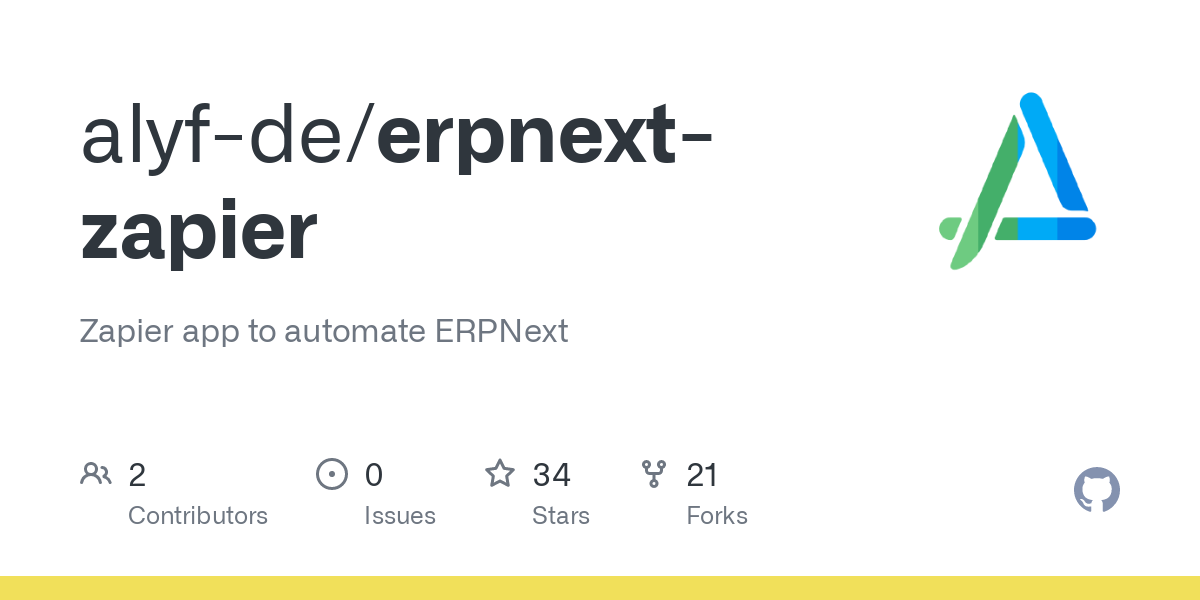 Zapier app to automate ERPNext. Contribute to alyf-de/erpnext-zapier development by creating an account on GitHub.

Welcome back. Sounds like a great idea. Let us know how we can help.

I’m also working on modifying the same library, but I want to integrate it with node-red.
It is kind of similar to zapier, but free, GPL3 and opensource.
It could be interesting to compare notes.

Yeah, I am looking to have someone develop it and submit it to the core application.

@botstore I have looked at node-red and there a few others like n8n.io “not truly open source” The biggest part is finding something that will get adopted into the core project and zapier opens the ERP to a bunch of other applications.

I have deployed more odoo instances because of this even though I feel erpnext is a better product.

Let’s get a project and I will deploy the developers to achieve this integration.

Hi @woakes070048, I developed the Zapier integration you mentioned. Would be happy to continue development if there are any sponsors.

We surely can get things into the core, but in this case it does not make sense. The integration I built tells Zapier how to talk to ERPNext. So this would run on Zapier servers.

The next steps would be:

There! All we need is a project now! You don’t need me even.

@rmeyer I am willing to sponsor a 1000 USD to get started.

Hopefully, a few others see a need or would be willing to contribute.

Zapier is too expensive and very limited. Think about it on long term. Why dont you consider to use https://www.integromat.com/ instead of Zapier? A connector still needed for that. This is my 2 cents, I am not affiliated with integromat.

In the perfect world, we all would have both.

I know my use case right now is connecting WHMCS and a couple of apps that are only on zapier and not https://www.integromat.com/.

On the other hand, I also use zammad that only has https://www.integromat.com/.

In time I would sponsor both providing that other want to aswell.

We already built connection between integromat and erpnext based on integromat (http, json, soap or xml option, I dont know which one). So this is why I vote for integromat against Zapier. As I mentioned it could work without connector, but connector would simplify all the things. If we go for Integromat, maybe I also consider to sponsor it. All the best! ERPNext rocks

@Monolithon is the erpnext intergromat connector you have on GitHub?

Our integration doesnt have ERPNext part, we built all the things at integromat side and it use ERPNext API. So there is no actual code to share on github.

@Monolithon do you happen to have any docs for that?

We dont have, bc we use integromat to make connection between two apps and both has public API documentation . (ERPNext API and the other app API as well). So any other document was not needed.

Thanks for your bounty, @woakes070048. I’ll get in touch via private message to clarify the details.

Anybody else who can contribute to this?

Its been awhile, but we would match @woakes070048 offer if he is still in.

@rmeyer I am interested in this.
I will contribute to this as well

@Mohammed_Redha, you can try to get in touch with @MichaelPinkowski and @woakes070048 to see if they are still interested. So far nobody came up with a tangible feature request and the willingness to pay for implementation.

Maybe this can be helpful:

ps: If I am right dokos is an ERPNext fork.