@IAGAdmin The Aus localised BAS reporting will be great. With the PAYG features does that pull in info from the ATO sliding scale tax rates?
So if an employee earns $800 per week the PAYG withheld total is auto calculated based on ATO sliding scale tax rate?
If that same employ works an extra day one week and earns $1000. Does the increased amount of withholding tax get auto increased?
Cheers

Hi @System19 we haven’t done this integration yet. It will be nice to do once the new payroll feature is completed.

We are currently calculating it manually using the ATO website

As is no, you’ll just have to find the tax rate for $800 and add the deductions manually. I’m not sure ERPNext would allow you to upload tax tables any time soon.
A tool like this http://www.paycalculator.com.au/ would allow you to do the calculations, not ideal but unless you get an Australian software with ATO tax tables you wouldn’t be able to set auto calculations.

Is anyone presently doing this in ERPNext?
My thoughts (about to place into practice) at present, dealing with the new payroll structure, is to create ‘yearly’ salary structures (duplicate from year before so brings forward majority of laboured condition / formula work) based around the release of the new tax scales. In the deductions I would add the applicable conditions and formulas for each PAYG range. Duplicate the following year, simply review and update as required…

We have been using the payroll section in HR module since last July. It was last step before dropping MYOB completely. At the moment we are running version 6.27. I’ll let you know about the new formula feature once we migrate to 7.1. We use Salary Structure same as yourself to keep history. For the time being, we manually calculate the PAYG using ATO website.

There is still a bit of extra work that needs to be done (e.g. PAYG calculation, YTD amounts, an Entitlements ledger, etc.), but we’ll get there.

This is one example of our latest payslip.

I’m pretty sure another requirement for pay slip is to state the number of holidays and sick leave accrued in Australia.

We are currently using Sage Wage Easy for payroll and HR which I have no complains about and ERPNext has a long way to go to be equal to.

@IAGAdmin, Your salary slip looks great. Also congrats on being able to drop MYOB. Its one of those apps that I feel is way over priced and just looks plain ugly. In retail manager (A 2.5k purchase) the UI was stuck at 800x600 until about 2 years back. Of course the app sat within its own window that couldn’t be resized so you ended up with a tiny MYOB rectange in the centre of any modern 1920x1080 computer monitor. My customer (A two person bricks and mortar retail store) ended up paying them about $3k in yearly support fees before this was fixed. Sorry end rant…

We have similar issues in Canada. So the sales tax report would also be useful here.

The payroll discussion is also relevant here. Another approach is just to use an outside payroll service, like jahicko described. Then alll you have to do is make 1 summmary entry in the GL to record the pay for each pay period. This could even be integrated, but it isn’t really necessary since it doesn’t require a lot of time, just some expertise which any accountant would be familiar with, to set it up the first time, and save the structure of the GL entry.
I really don’t know if its worth duplicating an entire payroll program, since some of the deductions can get pretty complicated (here at least), and we have to print out slips at the end of the year to give to the employees, and also when they leave or are terminated. Here it even varies by province. (Quebec is different) So, I think it makes sense to use an outside service, and integrate if necessary.

Amendment (Thanks @IAGAdmin): Leave accrual and sick leave are not mandatory per https://www.fairwork.gov.au/pay/pay-slips-and-record-keeping/pay-slips.

I have raised the leave accrual - if it can be added as a new salary component and increase the leave allocation of the specified employee per pay cycle that would be nice step forward. Also requested the option to exclude certain components from being included in the total sum i.e. super.

Would be good to see some more comments and recommendations following it.

According to Fair Work it looks like it is NOT compulsory to state leave balances on the pay slip. It’s only a best practices.

Where did you find the reference of your statement? I don’t see the point to complicate the Payroll section, if not required.

In our company each employee can access to their HR information and generate a report to see their entitlement balances (see image below).

Our target is to create an Entitlement Ledger so we can see when we accrue and take leaves. 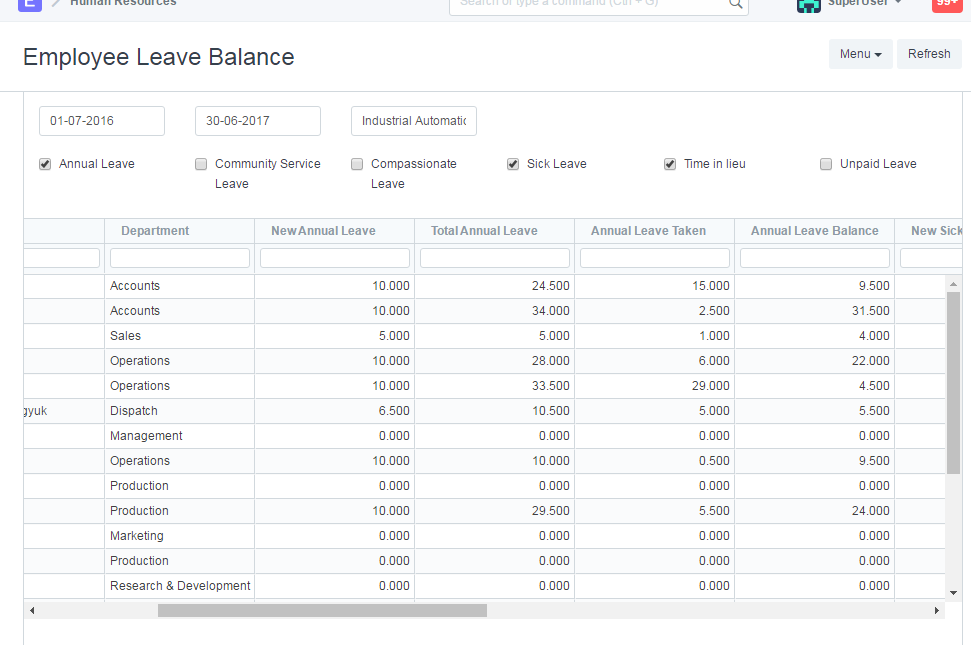 Hi @IAGAdmin,
Had a look at that same link last night - evidently fatigue got the best of me

you are quite right, so not mandatory at all.

I like the idea of the Entitlement Ledger. Have you any thoughts on the recommendation of adding the leave component? I see you presently have ‘New Annual Leave’ - how do you allocate this? Is it a manual process come pay processing?

No worries. Look we allocate them manually.

For the time being, what we do is dumping the Time Sheet (still Time Log for us as we are using 6.27) and calculate Salaries and Entitlements via Excel (see image below). Then update ERPNext manually. We have a project based manufacturing process, so each employee break their time down into project activities, post sales issues and unrelated activities.

The other problem we want to fix is to change from daily leave accruals to hourly leave accruals, as there is too much rounding going on. I personally don’t mind, but my colleagues are a bit concerned about it.

Do you reckon our report sounds it might work for Canada as well? We’ll release it to the community as soon as possible, so if there is something to change, please let me know and we can review and modify it now.

Looks great! Query regarding the setup of the accounts for the report - are they hard coded?

Look at the picture above about the Chart of Accounts. It’s a list of GST accounts we use in Sales Invoices, Purchase Invoices and Journal Entries. Each GST account has a rate. Some examples below.

@IAGAdmin - Re; sales taxes - sounds similar to me in principal. But here, we have 2 tax authorities or jurisdictions, so we have separate accounts in the GL for Federal and provincial, sales and purchases:
GST/HST on sales (all provinces)
PST on sales (quebec only)
GST/HST on purchases (all provinces)
PST on purchases (quebec only)
Exports or exempt are 0% so we don’t track them in a separate account
They are all based on the current rates for sales and purchases as you described, Any adjustments are made by journal entry
They get netted, and we make a journal entry to record the filing for the period, with the difference being either a payable or refund.
The GL tracks all the information that we need to fill out the form. Some programs make it easier by presenting a report in the same format as the form that we file. I can send you a copy of the report that we file, if you want

Apologies, poorly worded question. My question is how is the report configured to look at the Chart of Accounts needing to be reported on?
i.e. are we able to select our specific CoA for the report to pull from, or is it hard coded in the report to look at (per your CoA) GST Paid / GST Collected / GST on Imports?

No worries. No it’s not hard coded.

so If in your CoA ‘GST Paid’ is named ‘GST liability’ or, referring to @fblauer enquiry, there are two accounts one ‘GST/HST on purchases (all provinces)’ and one ‘PST on purchases (Quebec only)’, and you use them when recording Purchase Invoices or Journal Entries depending from which state are originated, when you run the report, it will use ‘GST liability’ or ‘GST/HST…’ and ‘PST…’ as description.

I was thinking lets create a module called Regional in ERPNext and dump all country specific doctypes and reports here.

We can then setup a map to show / hide them based on the country selected in the Setup Wizard.

Let me know if someone wants to start this!